‹
›
Home » Senza categoria » Management Committee and WGs Meeting In San Michele All’Adige, Trento. Italy
Open Google Maps Widget settings to configure the Google Maps API key. The map can't work without it. This is a Google's rule that all sites must follow. 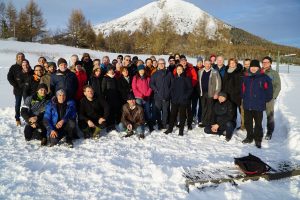 The second Management Committee (MC) of CLIMO was held in San Michele All’Adige, Trento (Italy) on 7-8 February 2017. The meeting was hosted by the Fondazione Endmund Mach (FEM) and involved more than 60 people from 25 COST and Near Neighbor Countries. Together with the MC meeting , also the Working Groups meetings  and a general assembly took place during the three days.